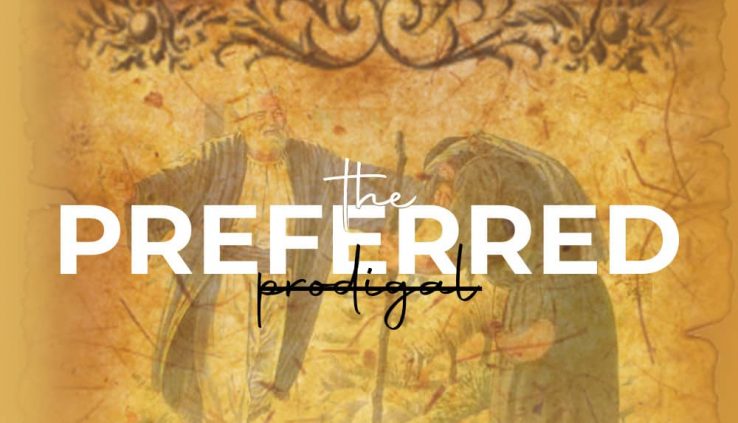 “Oh I can’t believe I did it”, I manage to say through teary eyes, my own words taunting me, screaming for my attention.

“Didn’t you swear on your life you wouldn’t leave him? Didn’t you!? Your confident mouth swore allegiance to him, you were all but pitching your words against His, but whose prophecy came to pass? Whose?!… He knew the kind of person you were all along, a traitor just like Judas!

Come to think of it, shouldn’t you be with Judas right now? Why don’t you go with him and find out how the silver would be shared. Don’t bother showing your face to the master anymore, He would be disgusted at the sight of you”.

Everything was pitch black, and all I could see was my own betrayal staring me in the face. I was so sure I would lay my life down for my Lord, I had poured out my loyalty before Him so boldly, even used my sword on those that came to take Him. My Lord had called me off, and implored me to take the path of peace, and I felt so close to Him then, felt invigorated even, till He surrendered to the Chief Priest’s men, and all my brothers fled at the might of Rome.

It was difficult then, but I still followed Him, no way I’d let my Lord, my Friend, be slaughtered without a fight. What did He even do, apart from heal the sick and bring hope to the house of already dying Israel? He was our ticket to freedom, our Messiah!

All the prophecies about Him had been fulfilled right before my eyes, heck, I had performed the same miracles He performed in His name. Yeshua was innocent, and we all knew it… but the Priests and Pharisees, jealous cause they had all the attention stolen from them, planned to silence Him forever, and took His life. The entire trial had their self-righteous fingerprints all over it.

I had followed my Lord to Pilate’s court house, but I could not go in. I remember how logical it had felt to stay and wait outside with the men to see what would happen. My mind had said it would be wise to stay and rest the night, keep my strength to fight at dawn, and I had agreed, hoping that my Lord would survive till morning.

I however hadn’t anticipated the little servant girl’s question right there in the courtyard, while she served us drinks for warmth. Her eyes met mine, and almost like she could smell Him on me, she blurted out “You also were with Yeshua of Galilee”… I feel so ashamed of it right now, but all my loyalty and supposed love for the master drained out of me in that second, and in a bid to preserve my life before the men in the yard, my own lips betrayed me, and denied the statement. It was my word against the little girl’s, and my desperation won that moment. I couldn’t stay there anymore, and so as to prevent something like that happening again, I moved to the court’s gateway, no way anyone would get me here.

But almost like little girls were out to get me that night, another one accused me of being with the Master, and I wasn’t about to get arrested with Yeshua, after all He was the one who chose to go without a fight.
A few hours later, and I had forgotten all about the little girls and gotten into a conversation with some of the men at the gate, something about Pilate’s new fleet of ships.

Apparently, they were a new set of ships with larger nets to catch more fishes than the average fisherman, while also equipped with extra lethal cannons, war draughts they called it. I had all but finished marvelling at the idea when the men started to examine me, with more certainty in their eyes than the little girls put together, and they argued “surely you are also one of them, for your speech betrays you”.

I didn’t even know Yeshua’s disciples could be identified with the way they talked, but my speech after that was definitely not the type that would have left the lips of any disciple of Yeshua; not even Bartholomew would deny Him that way. And at the second I was done proving my ‘innocence’, the rooster crowed, and with it the words of Yeshua came rushing heavily in my head, “Assuredly I say to you, this night, before the rooster crows, you will deny me three times”…

It’s been three days and three nights since His death, and I still can’t shake off this cloak of shame from off my back. My eyes have refused to stop leaking, and my own body curses the day I denied my Lord. Mary just left now, something about seeing the Lord and Him asking us, me especially, to wait for Him. “Wait wait, what did Mary just say?” I didn’t have time to confirm before running at John’s heels to the tomb to find it empty.

Yeshua is risen! His words have come to pass, just like His words about my denial. I remember all that happened again and feel guilt’s grip on my neck heavier than before. Even if He’s alive, He definitely wouldn’t want to see me, that’s all I can think all the way back to Jerusalem, the stony path echoing my thoughts.

Later that night, after mustering up enough strength to swallow something other than shame and guilt, my mouth hangs open, as He’s suddenly in our midst, Yeshua is in our midst! My eyes’ natural response is to turn away, but I can’t help but behold Him, and in His eyes all I can see is immense love. In that moment, all my guilt is packed up in one breath, and as Yeshua greets “Peace to You” with an intensity beyond what I have ever experienced, all the shackles of shame and guilt melt away, and in its place I found, unexplainable peace.

The Master stayed with us that night, and even dined with us, clearing all doubts of His resurrection, and as I think about it even more and more, my conviction of Abba’s love grows deeper… I am in Jerusalem now, leading the disciples and feeding the flock as the Master commanded; my own story more proof of God’s grace, to me and anyone who would believe in Yeshua’s name.

I have preached and taught countless times now on the story of God’s grace to anyone who would believe, even to those who feel the most unworthy, and I say to you now, you are not beyond salvation by God’s grace, for if God’s love could save me, then His grace definitely is enough for you. After all, you could say I am the Preferred Prodigal, as God’s grace was enough for me.
Tags: Peter's Denial Prodigal son Redemption Series Yeshua

noone is beyond salvation!!!